Phoenix, Arizona - A major bottleneck for commuters and commerce between Phoenix and Tucson could soon be alleviated with a significant $400 million investment from the State of Arizona.

Governor Doug Ducey’s fiscal year 2023 budget proposes funding to accelerate the expansion of a congested 25 mile stretch of Interstate 10 between Phoenix and Tucson from two lanes to three lanes.

“Governor Ducey’s acceleration of the I-10 widening project is a crucial step for expanding on recent gains that are making Arizona an economic leader in the west and the whole country,” said John Halikowski, director of the Arizona Department of Transportation. “Widening this key commerce corridor boosts capacity, enhances safety and improves access for local drivers. It’s an investment in the quality of life for all Arizonans.”

More than 50,000 vehicles a day travel the highway between the state’s two largest cities. During the morning and afternoon rush hours, traffic often slows to well below the speed limit. If an accident occurs, it can come to a standstill.

“The completion of the I-10 highway expansion is a major priority that will substantially impact the residents and businesses of the City of Casa Grande,” said Mayor Craig McFarland. “With a fast-tracked project, safety will be improved and our economy will continue to grow. We’re thankful to Governor Ducey for his proposed investment in this critical infrastructure.”

The state’s dedicated funds will cover 20 miles of the 25-mile segment between Phoenix and Casa Grande. The investment would competitively position Arizona to receive additional federal funds to complete the entire 25-mile segment.

Accelerating the I-10 expansion project would relieve much of the traffic congestion in the vital stretch of highway, improve public safety and accelerate economic growth for Central Arizona and the Gila River Indian Community.

“The expansion of I-10 will secure a safer future for the residents of Pinal County who use the freeway every day,” said Senator T.J. Shope of Coolidge. “Governor Ducey’s advocacy for the expansion in his Executive Budget continues to show his commitment to our county and all of Southern Arizona.” 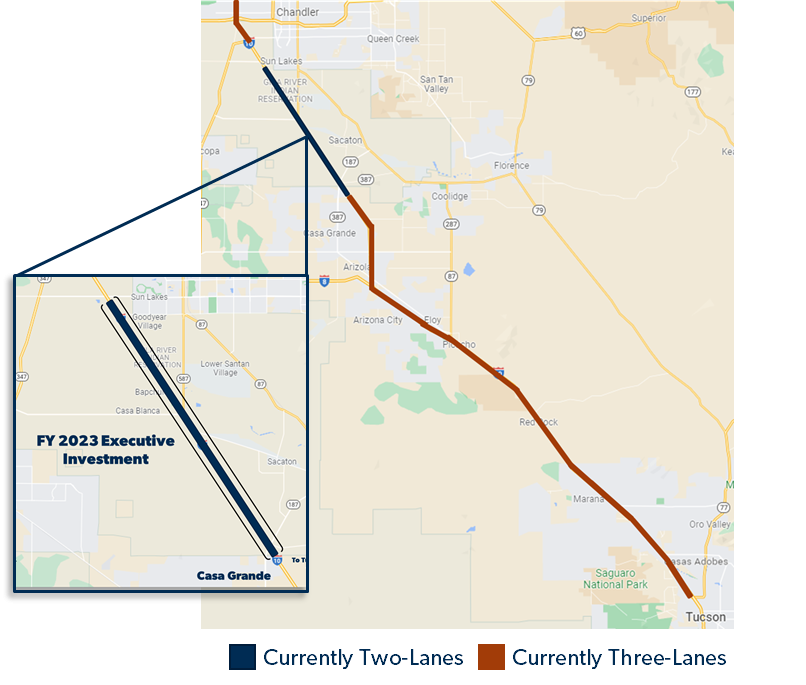 The Governor’s proposed $400 million investment would follow $50 million provided in fiscal year 2022, and $90 million to upgrade the Gila River Bridge. The infrastructure improvements to the bridge were the final hurdle in the overall widening of I-10 between Phoenix and Casa Grande. Work on design for that project is underway. Construction is scheduled to start in 2023 and will take one to two years to complete.

Upon securement of right-of-way and environmental clearance, the state-funded I-10 expansion project is anticipated to be completed in three to four years.

Governor Ducey was greeted with enthusiastic applause from lawmakers when he announced the plans to accelerate the widening of I-10 during his 2022 State of the State Address. The Governor said:

“A few years ago we got together and prioritized expansion of the I-17. Then, thanks to the leadership of Senator T.J. Shope and Governor Lewis of the Gila River Indian Community, we paved the way for a wider I-10, to improve movement and commerce between Tucson and Phoenix. But that project is still scheduled several years out from now, and 94 visits as Governor to Southern Arizona will remind you how important this issue is. So, let’s finish the job. Our budget will invest more dollars to get the I-10 completion leap-frogged to the front of the priority list, ahead of schedule, connecting our entire state, north to south.”