Yuma, Arizona - Governor Doug Ducey Thursday announced the hiring of Lorraine Rivera, veteran Tucson broadcast journalist and Douglas, Arizona native, to serve as the Director of his Southern Arizona Office. Rivera will succeed Becky Freeman, one of the longest serving members of the governor’s administration and an integral part of leading his agenda in Southern Arizona.

“Lorraine Rivera brings a wealth of knowledge and skills to our team. For years, she has listened to constituents, talked to community leaders and reported on the critical issues impacting southern Arizona,” said Governor Ducey. “I’m confident she will continue to advocate for the best outcomes for the citizens of southern Arizona and across our state.” 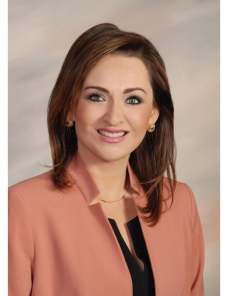 Lorraine is an award-winning broadcast journalist, serving as the host and producer of Arizona Public Media’s Arizona 360, a weekly public affairs show offering analysis and context about issues impacting Arizonans. She has more than 15 years of television journalism experience, including moderating gubernatorial, congressional and mayoral debates, and hosting community forums and discussions.

As the Director of the Southern Arizona Office, Rivera will manage the day-to-day operations of the Governor’s office in Tucson, while traveling throughout the state, maintaining relationships with elected officials and community leaders and keeping a pulse on the needs of Arizona’s communities.

“I am honored to serve in the Governor’s office and to be a greater advocate for Southern Arizona,” said Lorraine. “After two decades of cultivating meaningful relationships throughout the region, I look forward to embracing stewardship for a community I cherish. As a native of Douglas, I am proud to represent small-town Arizona and I hope it inspires future leaders.”

“Becky Freeman leaves big shoes to fill ⁠— she has been critical in our mission to serve not only southern Arizona, but every community in our state — from Globe to Gila Bend to Nogales to Prescott,” said Governor Ducey. “Her attention to detail and work ethic are second to none and she was instrumental in organizing my 95 visits to southern Arizona as Governor and I’m grateful for her dedication to serving Arizona. We will miss her, but she has an exciting future ahead.”

Becky began working in the administration in March 2015, just weeks after Governor Ducey took office, serving as deputy director of Southern Arizona under Juan Ciscomani. Upon Ciscomani’s appointment to senior advisor for regional and international affairs, Becky was elevated to director. Prior to joining Governor Ducey’s staff, Becky served as a program coordinator at the University of Arizona.

“It has been an honor to work with and serve in the Ducey Administration,” said Becky. “I’m proud of the work we have achieved throughout my time here and I look forward to seeing what else is accomplished during this final year. I have full faith that Lorraine will do a fantastic job serving local communities throughout our state.”

Lorraine has been featured on PBS NewsHour and has earned honors including: a regional Edward R. Murrow award in the category of “Hard News,” for her reporting on Arizona’s opioid epidemic; and a Rocky Mountain Southwest Emmy for her work as a host of the 2020 Arizona Senate debate in the “Politics/Government: Long Form Content” category. She received both her bachelor of arts in Broadcast Journalism and master of arts in Educational Leadership and Administration from the University of Arizona.