Governors from across the country along with White House staff took part in the meeting, which focused on state and federal efforts to reduce barriers and expand economic mobility for America's workers, improving childcare opportunities and expanding skills training programs.

“Arizona is the place to be for opportunity — with a booming economy it’s one of the fastest growing states in the nation,” said Governor Ducey. “I was proud to represent our great state today at the White House and share how Arizona is eliminating burdensome government regulations and paving the way for opportunity for all our citizens. This isn’t a Democrat or Republican issue, it’s something we can all agree on, by empowering all individuals and businesses to succeed. I look forward to putting into practice the ideas and policies discussed today so Arizona can continue to be a national leader in growing jobs and opportunity.” 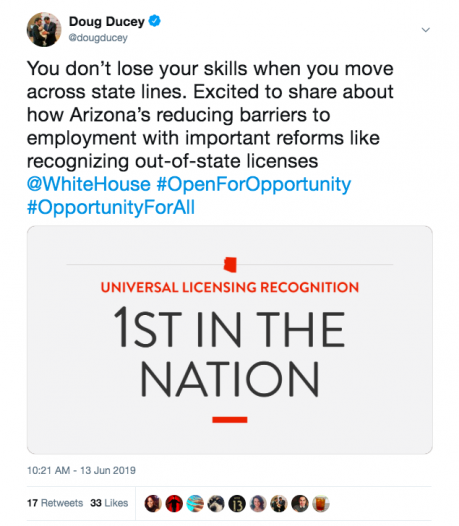 Since taking office, Governor Ducey has worked to rollback occupational licensing burdens and clear obstacles for Arizonans wanting to work. Here’s how Arizona is leading the way:

Universal Licensing Recognition — In April, Arizona became the first state in the country to recognize occupational licenses for new residents. The new law makes it easier for new Arizona residents to start working right away while ensuring protections for public health and safety. Click HERE to see what USAA, Ivanka Trump, and others are saying about Arizona’s work on universal licensing recognition.

Licensing Fee Waivers — State licensing boards in Arizona are required to waive any initial licensing fees for first-time applicants from families earning less than 200 percent of the federal poverty level. Since this went into effect in 2017, Arizona’s occupational licensing boards have granted 489 fee waivers for low-income applicants.

Supporting Military Members and Spouses — Arizona made it easier for veterans to transition to civilian life by requiring state agencies to consider relevant military experience, education and training to satisfy similar requirements when issuing licenses, certifications or other registrations. Arizona was also at the forefront of providing universal recognition of occupational licenses for military spouses.

Happy Babies Program — Arizona’s “Infant at Work” program started in 2000 as a way for mothers to bring their newborn babies to work, enabling them to continue breastfeeding during the early months of their child’s life. In 2017, Governor Ducey expanded this successful program, affectionately known as “Happy Babies,” to the Governor’s Office as well as the Governor’s Southern Arizona Office and encouraged other agencies to follow suit. In the past 2 years, over 17 state agencies have participated in the Happy Babies program and nearly 400 babies have been enrolled in the program.