Phoenix, Arizona - The FY 2020 budget allows schools to access $20 million in funding for more school counselors and SROs through a grant program administered by the Department of Education. The new dollars were a top priority of Governor Ducey, who proposed the first-ever dedicated funding for school counselors in the FY 2019 executive budget.

When an initial timeline was announced in June indicating the grant dollars would not be distributed until the 2020 school year—resulting in a delay of the additional counselors and school resource officers— the Governor’s Office intervened to accelerate the program. 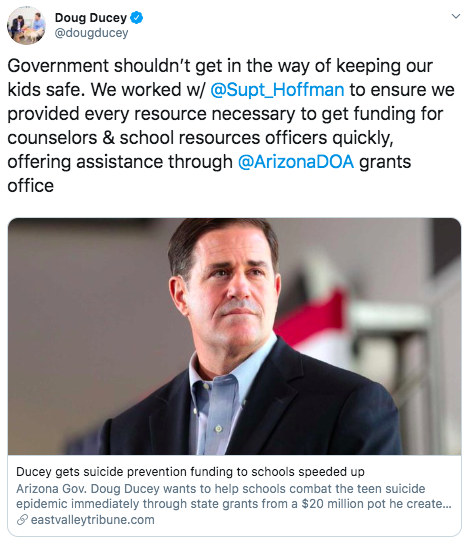 Governor’s Office staff worked with the Department of Education to ensure the funding will get to the schools as early as possible and offered the support of two executive offices: the Arizona Department of Administration’s Office of Grants and Federal Resources and the Government Transformation Office. With the support of these two offices, a new timeline was developed that ensures schools can access these dollars this school year.

Following these meetings, the State Board of Education met again on August 26 and voted unanimously to approve a new timeline that gets these resources to schools faster. Schools can apply for funding beginning Monday, September 16. The dollars will be available for this school year as well as the following three school years.