Yuma, Arizona - In his 2019 State of the State address, Governor Doug Ducey prioritized focusing on the "things that matter" and rejecting practices that, "seem to be a competition to pass the most new laws." Following adjournment of the session, in total the governor signed 320 bills into law - the lowest number of bills passed by the legislature and signed into law since 2015.

Over 260 of those will go into effect today, August 27, on what’s known as the “General Effective Day,” which comes 90 days after the legislative session adjourns.

Included in those bills are new laws to recognize out of state occupational licenses for new residents, implement new suicide prevention training in schools, and eliminate unnecessary and costly licensing requirements for those who simply blow dry and style hair.

Below are 10 laws to know that take effect today:

Governor Ducey signed H.B. 2569 on April 10, 2019, making Arizona the first state in the country to recognize occupational licenses for residents new to the state. As the governor put it in his State of the State address, “workers don't lose their skills simply because they move to Arizona.”

Arizona’s licensing boards and commissions will now be required to recognize occupational licenses granted in other states during the licensing process, which was already done for spouses of military personnel deployed to Arizona.

In order to be eligible, the new resident must have been licensed or certified for at least one year and must be in good standing in another state. H.B. 2569 ensures public health and safety protections for jobs that require background checks or other safety requirements.

Governor Ducey signed H.B. 2673 on March 20, 2019 creating a regulatory sandbox for property technology companies in Arizona. It promotes the development of new technologies affecting the transfer and management of both commercial and residential property.

In signing this legislation, Governor Ducey said: “With this forward-thinking legislation, PropTech companies will have a place to develop and test their products — while benefiting and protecting consumers. With this bill, Arizona continues to send the message loud and clear that our state is the best place to develop cutting-edge technologies.”

More than 4 in 5 American Indian and Alaska Native women have experienced violence in their lifetime. The U.S. Department of Justice has reported that in some communities across the United States, the murder rate of indigenous women exceeds 10 times the national average.

“The crisis of missing and murdered indigenous women and girls is a heart-wrenching reality that tribal communities have been experiencing for far too long,” said Governor Ducey upon signing the legislation.

The new committee will consist of members of law enforcement, Arizona’s Native American tribes, family members of the murdered and missing and additional victim advocates.

Govenror Ducey signed S.B. 1468 on May 8, 2019 to expand suicide awareness and prevention training in public schools to support Arizona’s adolecents and teens. The legislation, also referred to as the Mitch Warnock Act, received unanimous support as it passed through the House and Senate.

Guidance counselors, teachers, principals and other school personnel of charter and district schools who work with sixth through twelfth graders will receive:

Governor Ducey signed S.B. 1401 on April 16, 2019 to remove excessive and unnecessary occupational licensing requirements to blow dry hair. The legislation fulfills a priority called for in Governor Ducey’s 2018 State of the State.

Governor Ducey signed H.B. 2178 on April 1, 2019 to remove red tape for local ice cream stores and other businesses that manufacture or distribute ice cream or other milk products and sell them on-site for consumption.

Governor Ducey signed S.B. 1040, also known as Arianna’s Law, on June 21, 2019. The rate of mortality for new mothers in the U.S. is the highest in the developed world, and S.B. 1040 is set to improve the collection of data that will help provide new insights to prevent maternal deaths during childbirth. The legislation is named after Arianna Dodde, a healthy mother who tragically passed away after giving birth to her third child due to childbirth complications.

In signing the legislation, Governor Ducey said: “With Arianna’s Law, our state will begin collecting and analyzing more data, so we can identify solutions and reverse that trend.” 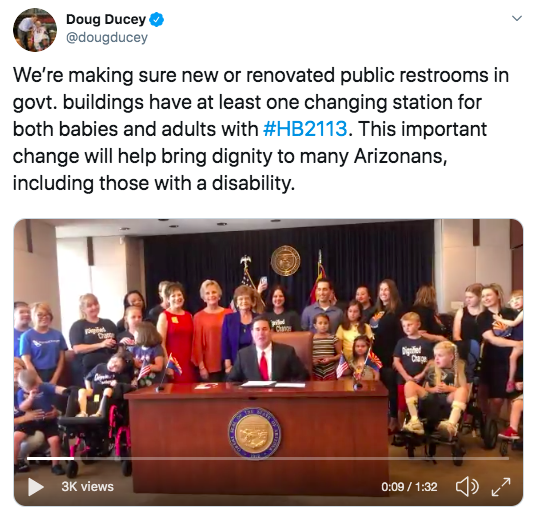 Governor Ducey signed S.B. 2113 on July 16, 2019, requiring new or renovated restrooms in public buildings will have changing stations for both infants and adults.

Specifically, the law requires the new or renovated restrooms to:

Governor Ducey signed H.B. 2488 on April 17, 2019, which directs the Arizona Department of Health Services to submit an annual report improving the tracking of veteran suicides in Arizona.

The program, which was defunded during the Great Recession, funds improvements to: