Yuma, Arizona - Attorney General Mark Brnovich announced his office (AGO) issued a legal opinion today determining the current crisis at Arizona’s southern border, fueled by violence and lawlessness of cartels and gangs, legally qualifies as an “invasion” under the U.S. Constitution, and Arizona has the power to defend itself.

“We were asked for an opinion and are thus providing Arizona policymakers with our legal analysis," said Arizona Attorney General Mark Brnovich. "The Constitution recognizes Arizona’s interest and power to defend herself from this type of invasion.”

Representative Jake Hoffman submitted a formal legal opinion request to the AGO asking whether the federal government is failing – intentionally or unintentionally – to uphold its obligations to protect our state from invasion under Article IV, Section 4 of the U.S. Constitution.

The AGO concludes that the violence by cartels and gangs legally qualifies as an invasion, but it's up to the Governor to make that actual determination. If that happens, the Governor as Commander-in-Chief has independent authority under the State Self-Defense Clause of the Constitution to defend Arizona from the actual invasion.

Today’s opinion comes as the United States faces the worst border crisis in more than two decades. Acting as if they are above the law, Mexican and Central American cartels are engaging in brazen attacks on Arizona, trafficking in drugs, weapons, and human beings.

Drug Trafficking
The cartels are pouring deadly drugs like fentanyl and heroin into the United States. In December 2021, the AGO, Scottsdale Police, and the Drug Enforcement Administration (DEA) seized 1.7 million fentanyl pills worth $9 million. They also seized ten kilograms of powdered fentanyl and one pound of methamphetamine. The drugs were from the Sinaloa Cartel. According to the DEA, “the Sinaloa Cartel primarily uses trafficking routes that go through Arizona,” and the Phoenix area is a major cartel drug trans-shipment hub. 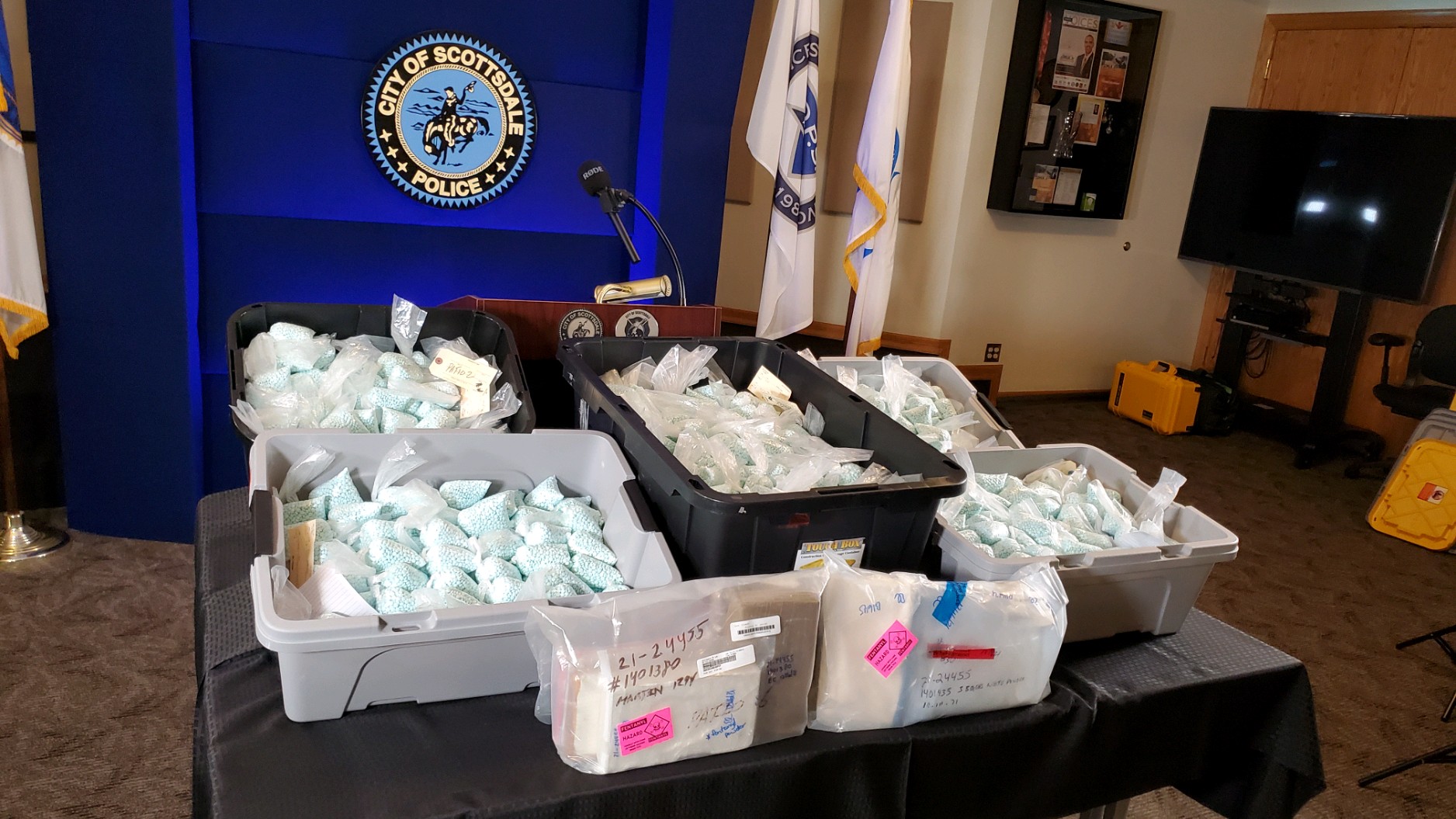 The above picture is from a record drug seizure last December by the AGO, DEA, and Scottsdale Police.

Deaths from drug overdoses are dramatically escalating, and most of that increase is driven by fentanyl and other opioids. For adults between 18 and 45, fentanyl overdose is the leading cause of death, killing more adults in this age group than car crashes, gun violence, or COVID-19.

Human Smuggling
Human smuggling is a lucrative market and in February 2021, it brought in more than $14 million a day for cartels and gangs. Annually, the cartels and gangs get billions of dollars a year from human smuggling. So it's no wonder that criminal organizations would be willing to engage in violent cross-border attacks to protect their profits.

Violence at the Border
The cartels' smuggling of humans and drugs is bringing more violence to the border crossing into the United States. Unauthorized individuals have engaged in a number of violent attacks in Cochise County, which shares an 83-mile border with Mexico. Individuals believed to be cartel drug smugglers are regularly caught on camera crossing the border, dressed in camouflage and carrying weapons to protect their drug loads. Border area ranchers have experienced this violence firsthand, including one who was killed the day after he reported a drug load to authorities.