San Luis, Arizona - Governor Doug Ducey Monday applauded the passage of $152.4 million in new federal funding to modernize the San Luis I Port of Entry in Southern Arizona. Designated as the number one priority port of entry in the United States by Customs and Border Protection, the San Luis I port is one of the busiest ports at the U.S.-Mexico border and the only port to receive this funding.

“Modernizing the San Luis I Port of Entry is critical to Arizona and our region’s economy,” Governor Ducey said. “Efficient ports of entry keep Arizona at the forefront of cross-border commerce and ensure the security of our state and nation. My thanks to everyone who supported this investment, including President Trump, Senators McSally and Sinema, as well as Representatives Lesko, O’Halleran, Kirkpatrick and Stanton.”

“This new funding is great news for the port and the entire city,” said San Luis Mayor Gerardo “Jerry” Sanchez. “This modernization will ease the process for those traveling to San Luis, strengthening our cross-border relationship and the economic benefits these visitors bring.” 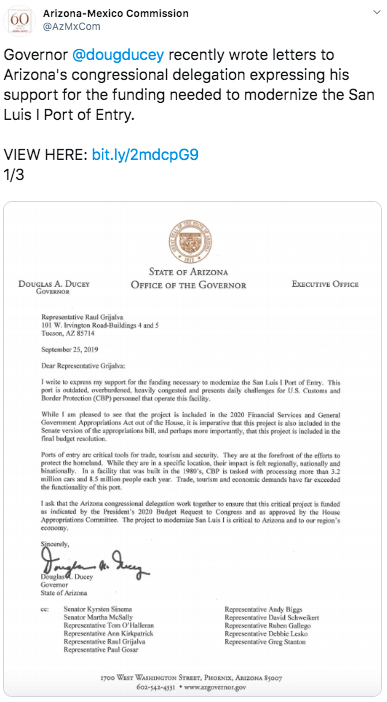 The San Luis facility processes more than 3.2 million cars and 8.5 million people traveling northbound each year. Trade, tourism and economic demands have far exceeded the functionality of this port, making this funding crucial to the local, state and national economy.