Moody’s rates states on a 21-grade scale, from C to Aaa. Arizona’s upgrade to Aa1 is the second-highest rating. With a balanced budget and vastly improved fiscal and economic outlook, Arizona’s rating has increased 3 grades since 2009, including 2 grades since 2015; this is now the highest issuer rating Arizona has ever received from Moody’s. Arizona is also the only state to have received two ratings upgrades from Moody’s in the past five years.

“Today’s rating boost is further validation that Arizona is going in the right direction — and that smart policies do matter,” said Governor Ducey. “Across our state, these policies are making a difference. Jobs are growing. Our budget is balanced. We are paying down debt. Our Rainy Day Fund is the highest it has ever been. We have more people moving here than anywhere in the country. And we are investing in the things that matter, such as K-12 education, public safety and infrastructure. This is a winning game plan, and my thanks goes out to all the legislators who have partnered with us to right our budget, reduce unnecessary regulations and ensure the world knows that Arizona is open for business.”

Moody’s cited Arizona’s continued economic growth, the rebuilding of its reserves and debt reduction in its ratings announcement:

“Arizona significantly increased its budget-basis and GAAP-basis reserves, in large part due to the growth of its diverse economy since the recession over the last five years,” the company said in its announcement. “At the same time the state has steadily paid down debt incurred prior to and during the recession, while limiting new borrowing, reducing an already-low debt burden. Other key factors in the Aa1 rating include below average pension liabilities and demonstrated budget discipline." 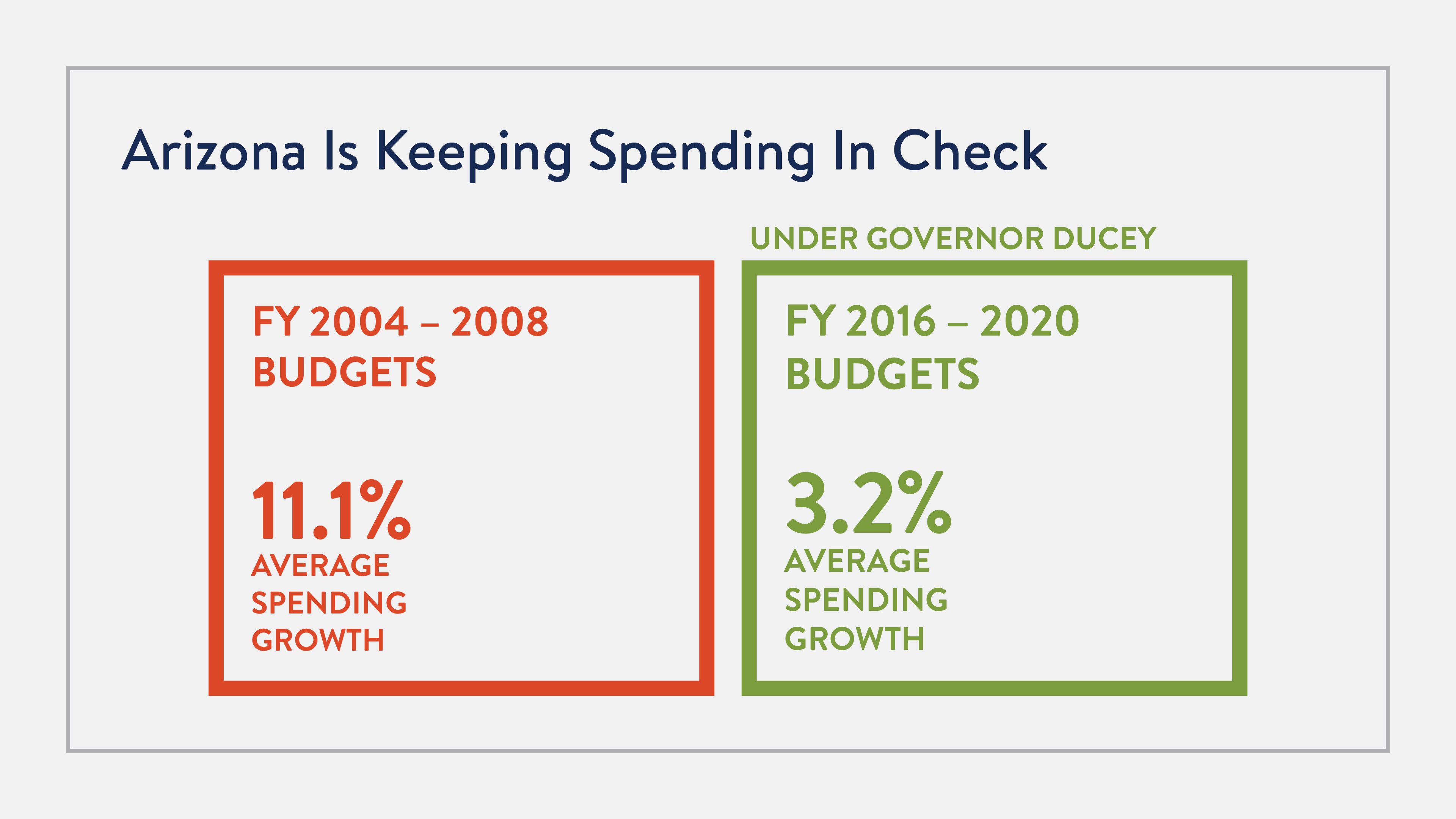 Saving for the future
Following an investment of $542 million proposed in Governor Ducey’s fiscal year 2020 Executive Budget and then signed into law, Arizona’s Budget Stabilization Fund, more commonly known as the “Rainy Day Fund,” reached a record-high $1 billion this year. The fund now sits at $1.014 billion or 9.2 percent of General Fund revenues. 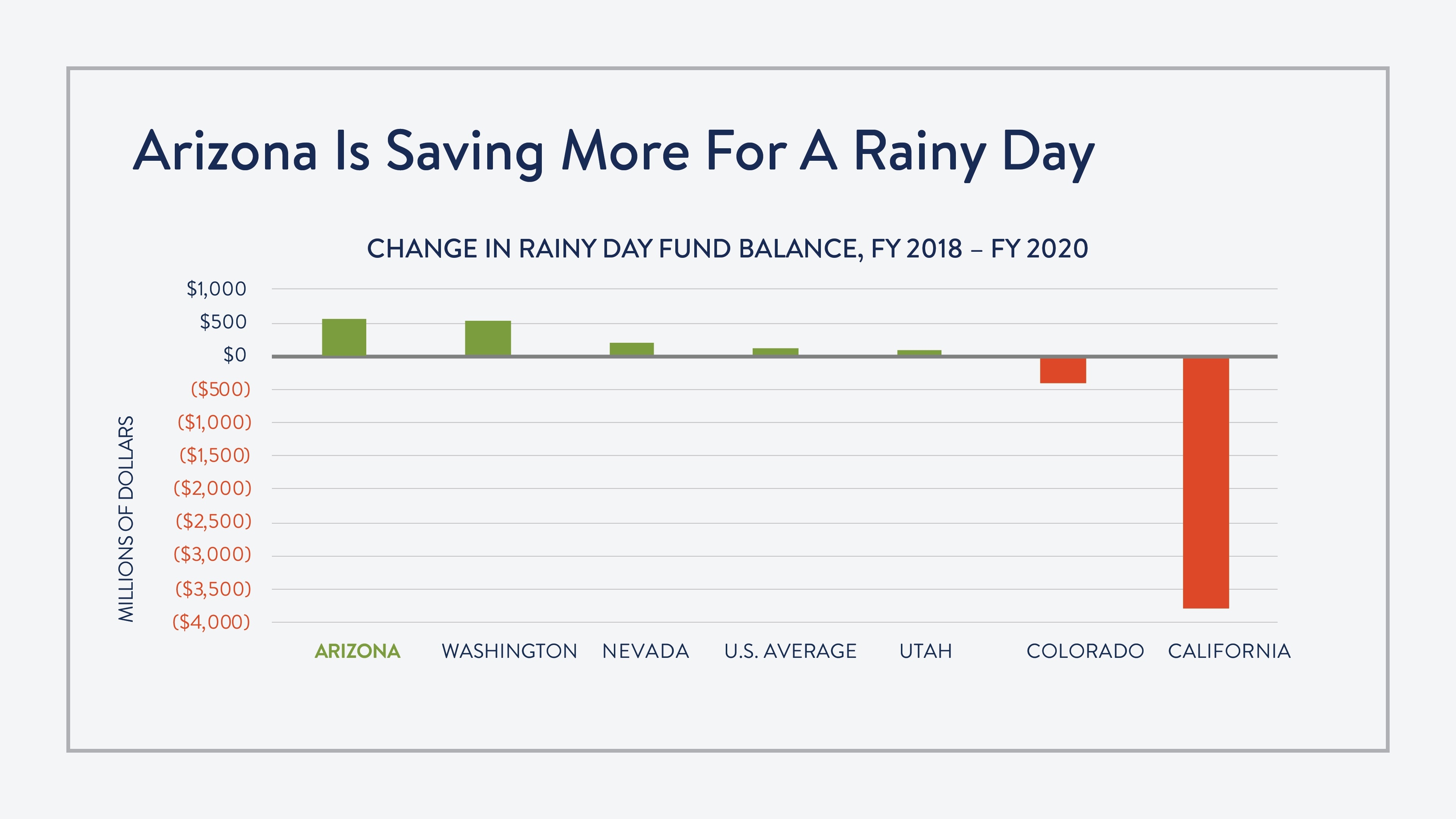 In June, Governor Ducey signed legislation paying off $190 million in state debt as part of Arizona’s fiscally conservative, balanced budget. The elimination of this debt will produce an ongoing savings of $24 million annually through reduced debt payments and avoid over $50 million in interest costs. The $190 million in debt reduction brings the total amount of State General Fund debt paid off since 2015 to $1 billion. Additionally, leveraging our stronger credit name, the State was able to refinance another $600 million in recession-era debt — saving $9 million per year in annual interest costs.

Adding jobs
Since 2015, Arizona has added over 300,000 new private-sector jobs. Arizona ranks third in the nation for personal income growth while experiencing its strongest manufacturing growth in 30 years. From 2014 to 2018, manufacturing employment in our state increased 10 percent, well above the national average of 4 percent and California’s increase of 4 percent. Arizona’s tech sector also is growing at a rate 40 percent faster than the U.S. overall and the state was ranked in the top five for total new net tech business establishments added between 2017 and 2018.

Welcoming new residents
More than 122,000 people moved to the state between July 1, 2017 and July 1, 2018, with Maricopa County ranked the fastest-growing county in the nation three years running. Arizona was recently named the number one “inbound state” in the nation and captured nearly a tenth of total U.S. migration last year.

Simplifying and lowering taxes every year
Since 2015, Arizona has simplified and lowered taxes every year and the average Arizona taxpayer today pays approximately $1,800 less in combined state and federal income taxes. This comes as State General Fund revenue collections totaled $11.23 billion, the highest level ever recorded, and Arizona was named a top-ten tax-friendly state by Kiplinger.